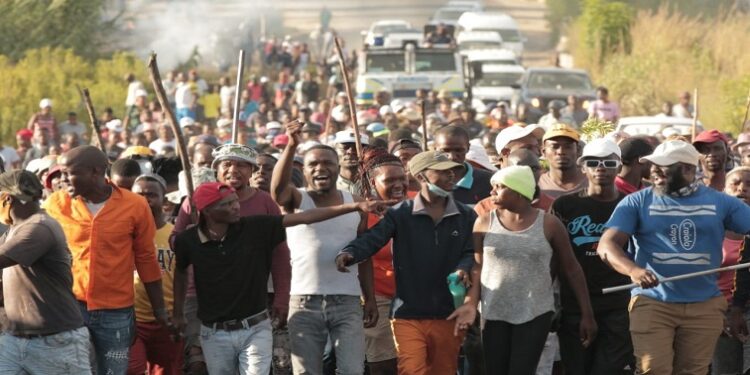 It was just before 10 pm when slain Zimbabwean national and Diepsloot resident, Elvis Nyathi and his family, had just watched all their evening soapies when furious voices of a group of men got nearer and nearer their shack.

And suddenly there were loud bangs on the corrugated iron, followed by voices demanding passports and Identity Documents, recounts one of the ladies who stays in one of the five small shacks in the congested compound.

Fear set in and survival mode kicked in – at the height of what some describe as “Afrophobic violence” that gripped the township earlier this week.

She spoke to SABC News under the condition of anonymity because she was afraid of being targeted.

“Obviously, when you hear people shouting passport, and you have been hearing about Operation Dudula, you start to get scared,” she says.

It was at this point that, she says, Elvis, his wife and a friend hid behind one of the shacks.

“These men came in and searched us and beat us up. No one was spared. They even got in one of the shacks and they were about to open the gas stove but they saw a little baby and they stopped. And as they were about to leave, they noticed Elvis, his wife and the other guy behind the shack. Elvis and this guy tried to run away, up the street and all I could hear was Vimba, Vimba (meaning a block).”

And then they were both caught.  “They beat them up and brought them back here,” she explains.

There was a glimmer of hope that Elvis and his friend would be let go when the attackers started demanding money from the family to let the two victims go.

“They asked for money and we were ready to give them everything we had and then they said they want R300. But we had R50 and they got angry and tied Elvis up and dragged him down the road like a dog,” she recollects hopelessly.

However, another opportunity for Elvis’s survival came when blue lights from a police van emerged from down the main road where they had dragged him.

“The police came, but these guys hid him from the police. Obviously, he no longer had a voice to scream at that time. And I think everyone was scared to ask the police for help,” she laments.

“Immediately after the police passed, they started pouring petrol on him and they set him alight.”

The other victim, also beaten to a pulp and left to die on the rocky street divided by a stinky little stream of sewerage spill, is currently recovering in hospital.

Elvis’s family is devastated. His younger brother, Miziayifani Nyathi says the family is not coping well with the tragedy.

“Eish, the family is just disturbed with this whole thing. For such a thing to happen, yet, the guy didn’t do anything. So, it’s really traumatic,” he says.

According to Miziayifani, Elvis’ sin was being outside as the group was searching for everyone in the shacks.

“They accused him of being outside while everyone was inside because he tried to hide behind this (place) since he’d heard these people talking about ID, passport and all that. So, that’s how they caught him.”

The younger brother, who has been in the country since 2003, says Elvis got up on the morning of Wednesday and went to work as a gardener in Fourways as usual, oblivious of the fate that awaited him on his return later in the evening.

“On Wednesday, he got up and went to work. He was doing garden, (in) Fourways Douglasdale. He spent the whole day that side, until 15h00 when he knocked off. He was there with my sister. They worked together on that side. Then after that, he knocked off and they came here. By the time, these people came in they were watching TV and then they heard loud voices from outside. My brother then came outside, because they were so scared because of this noise and people knocking on the door,” he explains.

Blood splatter remains visible on the door outside the compound – a painful reminder to the family of Elvis’ final moments.

“Mzi, we need to clean this off,” Elvis’ sister remarks.

Their visit was followed by officials from the Zimbabwean Embassy in South Africa who had come to offer their support with the repatriation of Elvis’ remains back to Zimbabwe where his four children leave.

Action SA Coordinator in Diepsloot and one of the community leaders, Armstrong Nombaba, has lambasted what he terms criminal elements that hijacked the protests in Diepsloot and killed Elvis Nyathi.

He says those responsible must face the law.

“If the councillors are going to convene a meeting and then someone died in that manner, we feel someone should suffer the consequences. Because of the person that was killed, the information that we got, the people who were protesting, having pangas and whatever, even if you were South African you were going to run away. The manner in which they were doing (sic) you were going to run away. They find people sitting on the street sitting, I don’t know what they were doing, they ran away. When they ran away one person was caught. This is the information that I got, I was not there and that person was burnt. I have got a video here,” says Nombaba.

Miziayifani says the family is scheduled to meet on Sunday to finalise the funeral arrangements.