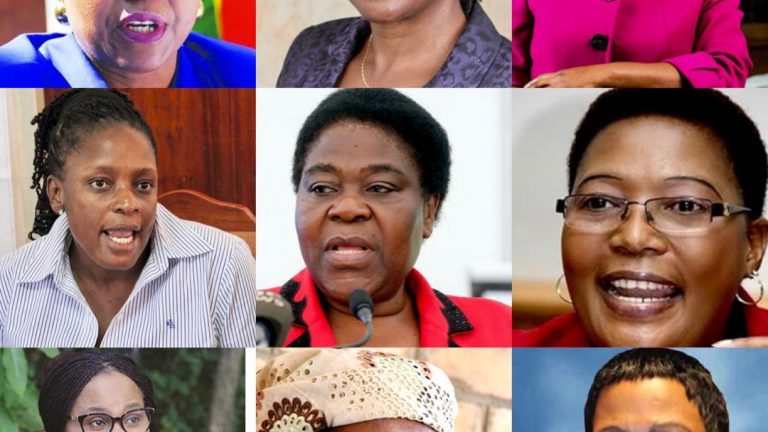 Women’s groups in Zimbabwe have called for a female second Vice President following the resignation of Kembo Mohadi. VP Mohadi in recent weeks has faced allegations of sexual misconduct and abuse of office and power.

Female entities like Women’s Academy for leadership (WALPE) , women’s and human rights activist Nyari Mashayamombe, Gwen Trust, ambassador to ending child marriages, Nyaradzayi Gumbonzvanda among many other gender advocates in Zimbabwe have expressed that  this is a singular opportunity for President Mnangagwa to do what is right and appoint a woman as Vice President in line with the Constitution of Zimbabwe’s gender parity principle. They argued that there are many qualified women to take the post.

See below statements from various women’s groups in Zimbabwe on the matter:

Riding with #FemaleVP on Twitter , the Women’s Academy for Leadership said: “WALPE welcomes the resignation of Mr Mohadi as it signifies the need to hold the office of the VP to the highest moral standards. We call on the Govt to investigate the cases & bring the former VP to account for his misdeeds. WALPE IS CALLING FOR THE APPOINTMENT OF A FEMALE VP”.

In a statement, Executive Director for the organization, Sitabile Dewa, added that “Section 17, 56 and 80 of the constitution guarantees gender equality. As WALPE we appeal to the President of Zimbabwe to correct the wrongs of 2018 of appointing all male Vice Presidents by making sure he appoints a female VP, a move that will go a long way in promoting gender equality and the empowerement of women. Male political leaders in Zimbabwe are on record asking where the women are”.

Ms Dewa expressed the concern that this usual phrase of ‘Where are the women’ by male politicians is just an excuse to continue sidelining women and perpetuating patriachy and discrimination and how with political will Zimbabwe can achieve equality.

Nyari Mashayamombe argued that Zimbabwe has 52% of women equally capable of leadership.

“The abuse of women in gvt institutions can only be stopped by females being leaders, #FemaleVP @edmnangagwa you owe us that much”, she said.

Sinethemba Women and Youth Development Trust said “This is the time for our President to put in place section 56 of our constitution Pana Vice president, gender equality in all spheres for the betterment of our country. There are many women with capacity and experience”.

From Institute of Women Social Workers: “Zimbabwe is party to the Convention on the Elimination of Discrimination Against Women. The CSW65 theme is “Women’s Equal and effective participation in Leadership……..”, we urge the President to take this seriously and act on Zimbabwe’s commitment to CEDAW. The current VP vacancy presents an opportunity for HE to fulfil this commitment by appointing a woman”.

GWEN Trust said ” The appointment of the much needed female VP for the Republic of Zimbabwe is right at this juncture and will communicate the government’s willingness and consideration to live up to the legal commitments and gender-eye made through international and national instruments. It also calls for strong efforts in allowing women to play their rightful part in the leadership of our great nation”.

“We note with concern the non-compliance with Section 17 of the Constitution in the public offices including the Presidium. We urge the President to consider the appointment of a woman to the post of Vice President”, said Dr Mildred Mushunje from Sexual Reproductive Health and Rights Africa Trust (SAT).

Kembo Mohadi becomes the first vice president to resign in the history of Zimbabwe. His predecessors either died in office or were forced out by a coup.

In his resignation statement Mr Mogadi says he is a ‘victim of information distortion, voice cloning & political sabotage’ and that he needed space to deal with his problems outside the governance chair.

“I have arrived at this decision not as a sign of cowardice but as a sign of demonstrating great respect to the office of the President so that it is not compromised or caricatured by actions linked to my challenges as an individual.”

Now that Kembo Mohadi was ‘pushed out’, Twitter users are speculating on who  they  think will likely be appointed Vice President with names like Valerio Sibanda, Sithembiso Nyoni, Obert Mpofu, Tshinga Dube and  Monica Mutsvangwa being thrown around.